Ong Bak: The Thai Warrior
When the head of his village's sacred Buddha statue is stolen, simple country boy Ting is sent to Bangkok to retrieve it. He is trained in Muay Thai, but vowed never to use it. Once he arrives in the big city, however, he is forced to fight.

Flags of Our Fathers
The life stories of the five Marines and one Naval officer that were forever immortalized as a symbol of WWII by raising the American flag at the battle of Iwo Jima.

Millennium Actress
Past and present collide as a documentary filmmaker obsessed with classic movies discovers a mysterious key that unlocks the secrets of a legendary actress who vanished at the height of her brilliant career over 30 years ago.

Victory at Sea (4 discs): The most famous historical war series ever made. A sweeping record of the naval battles of World War II. 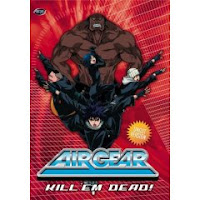 Air Gear v. 6: In a world where street gangs zip around on super-fast motorized skates, Minami Itsuki has the need for speed! He will do anything to master the Air Treck skates and become a Storm Rider himself.

Ken Burns' The War: Examine the ways World War II touched the lives of every family on every street in every town in America, through stories shared from families across the country. Includes featurettes, commentary, deleted scenes, and additional interviews.

Bridge to Terabithia: An 11-year-old boy's life is changed forever when he befriends the class outsider, a girl. Together they create the world of Terabithia, an imaginary kingdom filled with giants, trolls, and other magical beings.

Air Gear, volumes 1 - 6
Ikki's sudden popularity is attracting some unwanted attention from the leader of the Skull Saders, still bitter over his crushing defeat at the hands of a rookie. Ikki faces his rival in a gravity-defying race.

Ghost Stories, volumes 1 - 4:
When Hajime volunteers Satsuki for pet duty at school, she raises the ire of a fellow student--who, in turn, raises a certain rabid rabbit from the grave. Good thing there's a cabbie to get them out of there! (Though, it'd be even better if that cabbie wasn't some life-sucking ghoul with a nasty skin condition.) Add to these elementary menaces, demonic dolls with a really perverted idea of playtime and a ghost nurse with a disturbing bedside manner, and you've got a pretty good idea of the insane, spooky, and hysterical hijinks that await you in the most gleefully controversial and gut-bustingly funny anime you've ever seen.

Lemony Snicket's A Series of Unfortunate Events: Violet, Klaus, and Sunny Baudelaire are taken in by a series of oddball relatives and others after their wealthy parents are killed in a fire. The first to take them in is the dastardly and cunning Count Olaf, who is only interested in their inheritance.

Check the library's catalog for more information.
Posted by Hot off the press at 12:07 PM